Coach Browlan stated, “I simply feel that our teams name in the past has been tainted with something we don’t condone.  When we first named the teams the FleshMongers back in 1823, it simply meant one who deals with serving flesh.  We kindav figured that it was catchy, ya know, we deal in serving the opposing team their flesh.  In recent years that term came to be something, uh, ehm, to describe the ladies of the night.”

Hardin had this to say, “Not that we condemn the ladies of the night, but during games over the past few years we would notice people attending that were looking for something other than a sports game.  We simply felt it best to change the name of the teams.”

Gentry remained silent for most of the meeting, but in the end he gave his stamp of approval; “Manglers works.”

From this point forward, as indicated in the first sentence of this article, the football team, soccer team, hockey team, golf team, all of them, will be named the Zombie University Manglers.  All instances of the old name on campus (and the website) have been changed to reflect the new name.

Get an Official ZU Degree today! 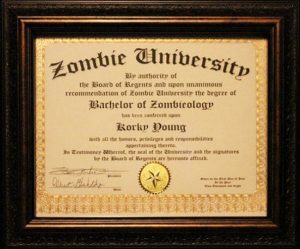